I’ve put together some master bathroom floor plans to inspire your own bathroom layout.  Obviously it's not likely that your layout will end up exactly like any of these but they will get you thinking about the possibilities.

If you’ve got a small space take a look at the small bathroom floor plans I’ve drawn up.  Small can still be beautiful!

This page forms part of the bathroom layout series.

You can find out about all the symbols used on this page on the floor plan symbols page and there's also bathroom dimensions information.

Here's some master bathroom floor plans that will give your en suite the 5 star hotel feeling.  These layouts are bigger than your average bathroom, using walls to split the bathroom into sections and including large showers and luxury baths.

In this bathroom layout, the bath has a luxurious surround and feels very protected – it's almost like a room in itself.  The area at the end of the bathroom forms the 'wet zone' with a seat to put clothes on (or for someone to have a chat with you in the bath) and plenty of space to dry off and not drag any water towards the vanity or the toilet area.  The separate room for the WC adds another layer of luxurious privacy. Here's another luxurious bathroom layout where the wet zone has its own door. I saw this bathroom layout in a magazine.  I love the fact that the shower and toilet are their own separate rooms.  It had a free-standing bath as shown.  I think I'd be tempted to make more of a bath alcove a bit like the first bathroom on this page.  A bit of space could be saved by making the vanity / sink areas slightly smaller. Here's another variation where the shower and toilet have their own rooms, with twin vanities and a luxurious bath.  The alcove could have windows in it I guess. How many washbasins in your master bathroom?

Some of the master bathroom floor plans above have two washbasins in a row.  I find that the main thing I like about having two washbasins is the sense of space.  When we’ve had two sinks my husband and I often found that we used the same one most of the time.  This got me thinking that a master bathroom would still be great with one washbasin (maybe a big one) while maintaining the same countertop and vanity space required for two sinks.  A bit less money and more storage.

Another arrangement we've seen above is having two washbasins but in different places so that they’re split apart.  What happens if you share an electric toothbrush base or toothpaste and other stuff?  Just a thought.

Here’s another bathroom floor plan that I came across in a hotel.  This one doesn’t have great wet and dry zoning – and no seat.  But it is slightly smaller than the five star version so it saves a bit on square footage. This next arrangement is a bit more unusual because of the way the shower wall provides the wall for the washbasins.  The wet zone is in the ideal location - at the back of the bathroom between the bath and the shower.  This arrangement opens out directly onto the bedroom.  It wouldn't work so well with a door. 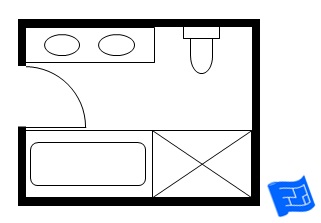 The layout below makes the toilet and bath more private.  Something you should know about this set up between the bath and the toilet...  The shower really needs to be at the opposite end of the bath to where to toilet is so that the toilet doesn't obstruct you from getting in and out of the shower - but this means that when you're taking a bath you've got a great view of the rim of the toilet seat.  A shower curtain that you can pull across the outside of the bath is a great solution to this. This layout has an arrangement where you step through the shower to get to the tub which creates a good 'wet zone'.  You could install a shower screen or a shower curtain between the bath and the shower.  If the door needed to be further down the end of the bathroom I’d switch the position of the toilet and the washbasin to avoid the view of the bathroom being of the toilet.  The door could also be placed at the end of this bathroom. The next bathroom layout is one that you might use if the master bathroom space was opposite a closet, opening up the vanity area to the closet but the toilet and bath have their own rooms.  A shower room could be added if you like.

Here’s two arrangements to consider if you’ve got lots of space. His and Hers Bathrooms

Sometimes, if you have the budget and the space, you might want to consider having separate bathrooms or making some elements of the bathroom his and hers (or hers and hers, or his and his).  In this option there’s separate toilets and sinks with a shared bath and shared shower.  Or you could have separate showers and a shared toilet - whatever combination you like.  If you're considering some his and hers bathroom layout just take a moment to consider if it might be more sensible to have two completely separate bathrooms. More bathroom design for you...

More room design for you...